HIV = human immunodeficiency virus. It harms cells of the immune system, which over time impairs its ability to fight off infections. If untreated it can cause AIDS (acquired immune deficiency syndrome) which means someone’s immune system is under stress.

People living with HIV or AIDS can live a long, normal, healthy life with the proper treatment.

Anyone can get HIV and it is most commonly spread by sexual contact with an infected partner.

How is HIV/AIDS transmitted? 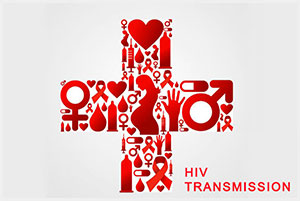 One of these body fluids has to get into the bloodstream which usually only happens in specific situations:

Sexual contact
HIV is spread most commonly by sexual contact with an infected partner. The virus enters the body through the lining of the vagina, vulva, penis, rectum, or mouth during sexual activity.

Blood contamination
HIV may also be spread through contact with infected blood. However, due to the screening of blood for evidence of HIV infection, the risk of acquiring HIV from blood transfusions is extremely low.

Needles
HIV is frequently spread by sharing needles, syringes, or drug use equipment with someone who is infected with the virus. Transmission from patient to healthcare worker, or vice-versa through accidental sticks with contaminated needles or other medical instruments, is rare.

Mother to infant
HIV also can be spread to babies born to, or breastfed by, mothers infected with the virus.

HIV cannot be spread through casual contact such as hugging, kissing, sharing a bathroom, towels or dishes.

HIV is not airborne and cannot be spread through:

What is HIV doing inside the body?

Once inside the body HIV is seeking out certain types of immune system cells- CD4 cells. It takes over those cells and uses them to create more HIV, and those healthy cells die. The purpose of HIV treatment is to stop that process so the body can function normally.

Some people may develop a flu-like illness within a month or two after exposure to the HIV virus. Many people do not develop any symptoms when they first become infected and if they do, they usually disappear within 1-4 weeks and are often mistaken for those of another viral infection such as the flu. Symptoms may include:

It can take a long time for ongoing symptoms to appear- up to ten years or more. Even if someone doesn’t feel sick, their body is still making HIV virus which means they can give HIV to someone else. During this asymptomatic period, (the period of time when someone feels no symptoms) HIV is actively infecting and killing cells of the immune system. This will be apparent with a decline in the blood levels of CD4+ cells—the immune system's key infection fighters. This process can continue for quite some time before symptoms of HIV start to appear, but over time as the immune system weakens, complications begin to surface. The following are the most common complications, or symptoms, of AIDS. Each individual, however, may experience symptoms differently. Symptoms may include:

Early HIV infection often causes no symptoms and must be detected by testing a person's blood for the presence of antibodies—disease-fighting proteins—against HIV. With a 4th generation HIV Test, these HIV antibodies can be detected as early as 10 days after being exposed to the virus through sex or from sharing needles. Most providers are using this test, but it is always a good idea to ask which test is being used. The sooner HIV is detected and treated the better. When a person is highly likely to be infected with HIV and yet antibody tests are negative, a test for the presence of HIV itself in the blood is used.

There are effective treatments for HIV that help people live a long and healthy life. Treatment of consists often just one pill once a day with minimal side effects.

The goal of the HIV treatment is to reduce the amount of virus in someone’s blood and suppress it. When the virus is suppressed it allows the immune system to function better and do its job, which is to keep people healthy from infections. Viral suppression is also called “undetectable.” Undetectable means there is so little virus in someone’s blood the test cannot give an exact number of how much virus is in there- the amount is too small. It does not mean that the disease has been cured. At this time, there is no cure for HIV, so someone living with the disease has to take the medication every day to keep the virus at bay.

Even if someone has no symptoms of HIV infection they can still give the disease to someone through sex or sharing needles.
HIV cannot be transmitted through casual contact like hugging, kissing, sharing bathrooms, towels, eating or cooking utensils etc, or by animals.

There are a lot of ways to prevent giving HIV to someone else. Here are some things to remember:

Viral suppression or being undetectable is the best way to reduce the risk of giving HIV to someone else (and it keeps the person with the disease healthy too)
Using safer sex methods such as condoms are a great way to prevent transmission of HIV and other sexually transmitted infections. We keep condoms in our clinic so just ask our staff if you would like some.

Now people who are not living with HIV can take a daily medication to prevent them from getting the disease. It is called PrEP.